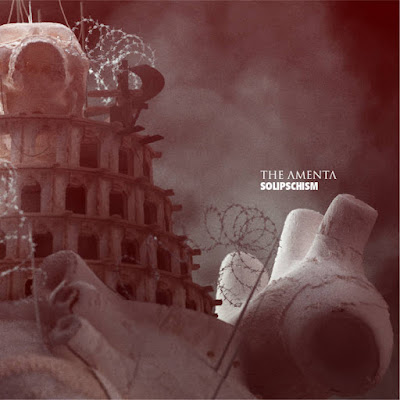 The Amenta are fiercely original, dedicated to their craft and purveyors of an unclassifiable mix of extreme metal. We bow down to this band because they take every essence of their work as serious art. As it should be, fuck all the throwaway imitations of past greats, create your own masterpieces. This year's gruesomely gorgeous album Revelator burnt its confidence and weirdness into our souls, yet we crave even more blood from this amazing creative force. Fortunately, we have this killer EP that drops very soon.
The band said this:

During the recording of "Revelator", The Amenta’s 2021 album, an extra track was recorded but ultimately removed from the album. Combining a dank, dub-inflected verse with grainy distortion bursts and a coda that rides a tribal rhythm into the void, ‘Solipschism’ can be seen as a missing key to the puzzle of "Revelator". Backed with ‘Labourinth’, a creaking piano piece based around a coded message, the ‘Solipschism’ 7 inch is a further disintegration of expectations.

And whilst you may suggest it's just two tracks, wait until they invade your ears, my friends.

Solipschism is incredibly unique and suggests initially a simple brooding and unsettling soundtrack to an upcoming evil act of some description. And this as always is something The Amenta excel in; you cannot predict what is coming next. Seriously the drums and well-placed electronics are as perfect as is the creepy as hell vocals. But this is not an evil or grim approach for the fun of it, it is a clever and well-thought-out approach to music that is frightfully lacking with most music these days. It delivers a killer sucker punch of brutality, but you couldn't see it coming. And that sort of demented wizardry is what defines extreme music at its finest. In the whole song, you get everything from semi-ambient dubby soundscapes to Nu-metal memorable style to Industrial style ranging from Laibach to Rammstein to NIN and even Behemoth blackened death metal stylings. Now that's impressive but easily done by one of Australia's finest metal artists. They deliver the harshness just as effortlessly as creating an unimaginable atmosphere and intrigue. A brilliant track and glad it was released, not added in later years to a comp of extra unreleased gems.

Labourynth is the flipside to this EP and it is wholly a broad key-driven sombre piece of dark art that counterbalances, yet in its simplicity shows the main ingredient to this band, painting an atmosphere.
When you drop yourself deep into bands like Joy Division, Massive Attack or Morbid Angel; the most dominating effect is that there is an emotive atmosphere that grips you. The Amenta can release all of the many gifts at once or keep it simple. These two tracks exhibit the talent here and it is well worth getting this as soon as it drops.
Solipschism EP | The Amenta (bandcamp.com)
This is beautiful and ugly extreme music and is very necessary!!.