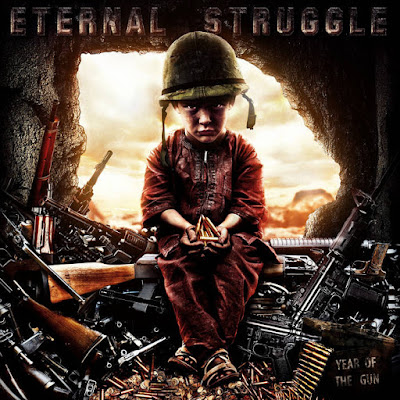 This month has been an incredible one for awesome releases and this release is just extraordinary. My main musical love is Hardcore, I make no qualms about that, and this album is just everything that makes hardcore so wonderful. Razor-sharp riffs, solid as hell bass/drums, and gritty vocal prowess. From front to back, this one of my favourite releases of the year.
BIO:
Born into the political heat and everyday challenges of life in the so-called ’holy land’. A system infiltrated with corruption, racism, mandatory army drafts, religious agenda, and a brutal militarized police force abusing their power and limiting basic human rights. Eternal Struggle is known for its aggressive and chaotic live performances as well as its strong ambition as a forward-thinking band, fusing elements from both worlds of Extreme Metal & Hardcore Punk. Socially, always fighting the good fight, while bringing different music communities together over their PMA ethics and their hard-hitting, in-your-face groove-ridden songs.

Year of The Gun is the band's debut album and is 13 tracks (plus one bonus remix) of pacey old-school hardcore with tons of groove and brilliant thrash metal touches. One minute it dips into face-ripping hardcore like classic Sworn Enemy/Madball, then it diverts into deeper toned and catchy grooves like peak period Biohazard. And it never settles for a second, it just punches and pushes harder and harder. It even has the skillset to dip into the crossover magic stylings of Brazil's R.D.P. etc. Even if it wasn't their debut release, you would hold this album in high acclaim. This is a flawless album, the aggressive riffs lather you in thick guitar layers, and then like both classic death metal and hardcore bands; the pummeling drums dictate so much. This is not to pay less respect to the basswork and vocals. These are equally overwhelming, the bass is so in sync with the forward and dynamic nature of the album. It just keeps your head moving and you want to mosh until the floor breaks. And vocally, Ori is one of the best hardcore vocalists I have heard in ages; sitting comfortably between a Lou Koller style, Max Cavalera metal range, and Karl from Earth Crisis. And that's a huge compliment because these are personally three of my fave vocal artisans. 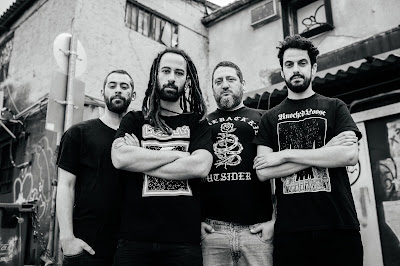 Honestly, it's hard to pick fave tracks as the album flows tremendously well and is pedal straight to the floor the whole way through. Whilst the title track has the most Slayeresque opening riffs and hooks you in so quickly, As Heroes Fade and Point One won me over with epic and clever tempo changes and Indoctrination was rightfully the first single from this album to drop with its mountainous landscape of caustic guitar work. If you can listen to On Broken Backs without wanting to bounce off the walls, I suggest you give up listening to music period. (Plus check the perfectly cadenced drums out on this track!!!). I love the slow corrosive intensity of Dependence as much as the pure hatred and scathing that drips from To My Enemies. Releechious is like SOIA on steroids and Modern Slave is an absolute aggro groove train with killer lyrics to boot. Pride Kills is more about attitude and gusto than finesse, but once again the rhythm section and guitar dominate completely. But Propaganda reminds me of the best fast crossover hardcore of the highest order and is a huge highlight despite its brevity. Last Path closes the album prodigiously with a track that pretty much highlights how skilled this band and reminds you this is just the beginning of many classic albums to follow.
Oh, I forgot to mention the production was handled by pure legend, Mitts who played in both Skarhead/Madball and it fucking shows. You can really tell when music is curated by people who know, live and breathe the hardcore code. It shows by not being overproduced and it's well balanced and aggressive as hell. Another fucking New York legend Drew Stone served as a mentor/director/coach, yes it kind of makes sense now eh!.
This is a mind-blowing hardcore debut album full of confidence, aggression and intensity.
100% one of my albums of the year!!!.
Eternal Struggle’s ‘Year of the Gun’ is scheduled to be released worldwide June 4th, 2021 via. Demons Run Amok Entertainment (DE) Upstate Recordings (NY) distributed by Blood Blast Distribution (US) and represented by M.A.D. Tourbooking (DE)
https://eternalstrugglehc.bandcamp.com/album/year-of-the-gun
Watch this:
https://www.youtube.com/watch?v=Libsbw9Eq98
Get antisocial:
https://www.facebook.com/eternalstrugglehc