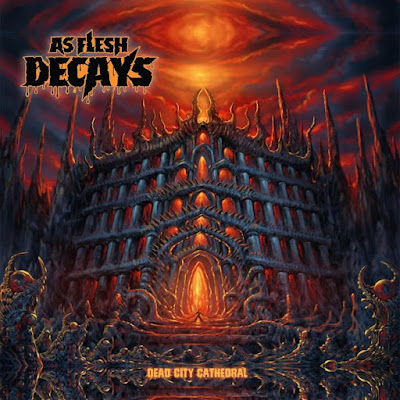 This is the second album for this stunningly savage Death Metal band from Victoria/NSW(half from each state). The Horror Of It All was a killer debut album that was both solid and crushing. However, in comparison to this new release, you would almost think both albums were from different bands. That's no criticism, but Dead City Cathedral is just a complete monstrous beast of an album. The heaviness is utterly suffocating and equally atmospheric in a horrific cult film way. Everything works perfectly from start to finish and any fans of this genre will idolise this release. Most of the album absolutely sits in the style of  Dismember, Grave, Autopsy, Necrophagia, Deicide, Gorelord etc and I am totally fine with that fact. But one huge difference is this album is completely outstanding songwriting, brilliant album structure and astonishing production/mixing and mastering to die for. This is easily one of the best releases of the year. Strap yourself in because this album is a blistering Death Metal classic that you will have on repeat for years to come!. 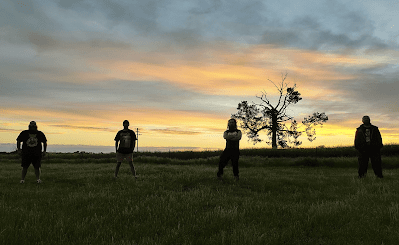 The mixing and mastering were lovingly(in an unrelenting style) handled by Dan Swano whose magic hands have graced Abramelin, Asphyx, Dark Funeral, Dissection, Entrails, Malevolent Creation, Marduk, Misery Index, Nasum, Opeth, Pestilence to name a few well-known acts. And he makes this 4 piece act sound incredibly colossal, very balanced and not remotely overproduced. I mention this in the context of Napalm Death's Harmony Corruption which is a solid album, but the production was devoid of any soul and sounds flat. Dan makes every vocal and instrument sing in a massively forceful way. And it amplifies how much progression AFD have made since their debut.
Whilst the major component of this album is the definitive caveman death metal meat and potatoes music we love, the clever twist is the structure. Based on Dario Argento's famous The Three Mothers Italian horror trilogy, tracks One, Four and Eight serve as beautiful signposts for the album. The band enlisted the morbid master himself, Klavier Krieger (who we have reviewed/interviewed and adore) to handle the grim atmosphere here and it works perfectly. Mater Suspiriorum is a stunning and brooding intro to the album with that lovely Swedish guitar tone we adore so much and it just guides us into the mayhem that will soon unfold. It is largely instrumental except for some skull-crushing vocals at the very end of the track. Now that's a heck of a ghastly introduction to the album. We will drift back to these Mater tracks as the review unfolds. And before you can take a half breath, you are hit by the triple freight train that is An Excellent Day For An Exorcism (surely winner of 2022's best song title? the answer is yes!). The track is so damn catchy and is melodic as it is piercing. Samples add some depth and the vocal placement is captivating, but let's be honest the Swedish DM guitar tone cuts as deep as the very first time you heard Left Hand Path. The riffs are thick, fast and just flat out abrasive. 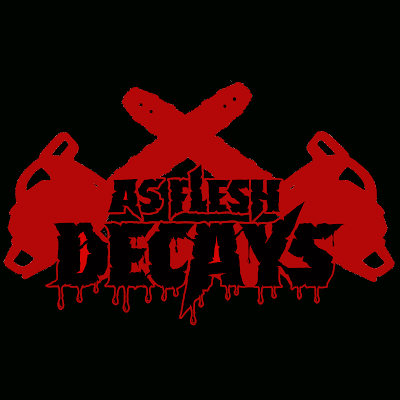 Similarly, but quite different is the following sledgehammer of a track, Let Us Prey. No chance of respite as this third track literally pulls the noose around your neck before you can even start headbanging. And yet again, intelligent songwriting, driving riffs and oppressive vocals dominate the entire audioscape. Already you know this is one hell of an album already and the breakneck pace is quite exhilarating. Mater Tenebrarum luckily gives us some oxygen, but in a fearful and unsettling manner. Again the use of a stark instrumental is purposeful and sets up the next piece of this brutish release. Next up is The House That Death Built and we have some remarkable guitar savagery (and killer bass also) for something different, but the focus is on Lacca's spine ripping vocals. These dominate the song and are the type of vocal rollercoaster I really worship. The vocals are so integrated with the ferocious bass and guitar tone and of course, the barbarian battalion like drums never let up on a single track.  The inhuman pummeling of a confident rhythm section always adds that edge and makes the whole album akin to Apocalypse Now amplified. In case you haven't dropped dead or collapsed from the merciless stampede of this album, the band are kind enough to briefly slow(well part of the track...lol!) things down a touch, but be wary as Suffer Decadence is a creepy and sinister beast. To be honest, this track is just as sadistic as the other tracks, but I really dug the tempo transitions and this one really grinds you down by the song's brilliant conclusion. Again, it is very clear this album is well thought out and sets the listener up to go on a downright ballbearing journey. 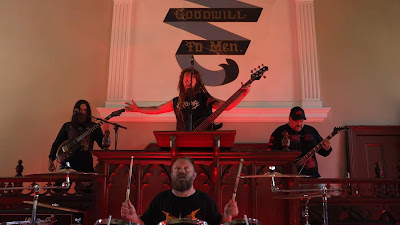 Track seven is Transcendence Through Torture and is currently my favourite track of this release.
It truly delivers everything by the absolute truckload; meticulously harsh vocals, coarse down-tuned guitar magic and riffery worshipped at the throne of HM-2 and beyond, plus militaristic drums that seem to be imported directly from hell. This track drips in an epic nasty atmosphere and wastes not a millisecond in it being punishing and devastating. I also dug the tempo change that occurs from the 1:35 min mark, it was an astute move that played out so expertly. And definitely reminds me of the classic Entombed tangental splendour. Impressive is an understatement. Mater Lachrymarum assists the conclusion of the original tracks of this album and is part demented mental asylum, part trapped in a house of horrors. It is eerie, creepy as fuck and works well as previously mentioned; these Mater signposts guide you thru the glorious insanity of this remarkable album. Kudos to the band for going out on a creative limb and setting such a high standard for Aussie Death metal. Then as a killer bonus, you get two top-notch bonus tracks, which are two peerless cover tracks of Dismember's Casket Garden and Necrophagia-Burning Moon Sickness. Both are excellent versions that will fit perfectly in any live setting or blasting loud at your neighbours. Both honour the originals and add the special AFD flavour to the mix. 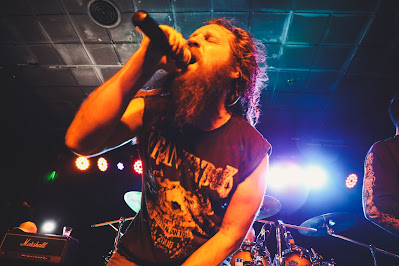 All in all, this is an easy contender for album of the year. This is immensely cinematic(in a raw 80's horror way) and sickeningly raucous death metal of the highest order that will destroy your eardrums and hypnotise you with just how heavy and catchy extreme metal can be. The whole release is intelligent, well-composed and structured with vision and guile.. This album sounds huge and is on par with some of the classic peak period albums we all go back to. Impressive and you need this album asap.
Out tomorrow:
https://1054.bigcartel.com/product/as-flesh-decays-dead-city-cathedral-cd
Digital:
https://1054records.bandcamp.com/album/dead-city-cathedral
Watch now:
https://www.youtube.com/watch?v=aoF_p5lIpdU
Get Antisocial:
https://www.facebook.com/AsFleshDecays