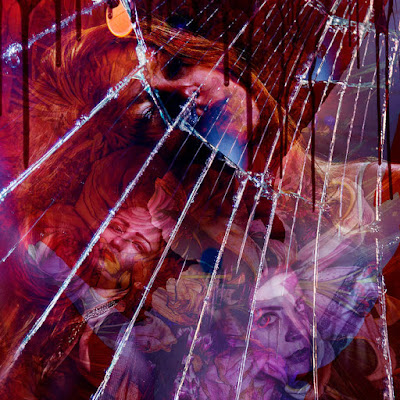 What strikes a musical flame with you?; is it a certain amount of creative flair, challenging concepts that psychologically mess with you or art forms that are not easily defined?. All of these paradigms are equally appealing and entrancing, but together it makes an exquisite mess you cannot help but worship. In less than 12 minutes, this release will dip you in a chaotic palette of artful unrest and make you replay again and again. I cannot attempt to pigeonhole the overall sound it's like Tom Waits on an acid trip with hectic shoegaze and also ambient riffs, it's heavy, almost psychedelic and has the makings of a cult soundtrack vibe. It's gloomy but very dynamic.
Nathaniel Shannon is a proficient and well-versed artist of many mediums. Most of his work has a dark edge to it and it is equally gritty and vivid in so many aspects. In the guise of this project he last released a warped but deep debut album Trespasses in 2016, that was an emotive gem that just gives and gives. If you dig original music that has fantastic structure and is grim, slightly folky and fucked up you are in for a gem. But Three Mothers takes that solid basis and builds towards fantastic horizons.
Inspired by The Three Mothers an insanely dark Italian trilogy of forbidding witchcraft/horror films that are a brilliant commentary on death, humanity and power, Nathaniel brilliantly feeds a macabre tone into a bleak, yet catchy and drony musical feast. The thick, slow-paced vocals gel perfect with magnificently warm keys, jangly riffs and echoing drums. For a release that only has three tracks, it definitely seems like a mini-album. The lucid colour is turned up and the listener is better for it. As the release spiel clearly states:
The songs began to lurk together as a triptych and an unhallowed dance of witches, given life by camaraderie forged in a bleak, disillusioned world. Desire is an otherworldly experience: when one takes time to observe it within themselves, we notice it comes from the void. We experience it when we surrender to the fact that we have control over our actions but not our longings. The spectrum of nostalgia includes fierce identity and a defense of self, down to the bitter pangs of grief and enduring ache for what is no longer or worse: what our deepest fears tell us will never come to be.

In Shannon’s case, these archetypes come forward in the form of forbidden and fantastical inspired murmurs from the underworld. The voice of the necessary villain: screaming, feedback-laden guitars and live, battle-reflecting drums create a Plutonic aesthetic that invites the listener inward to the culling of a forsaken innocence. Argento’s witches are vile, yet fulfill their purpose as anyone or anything is meant to do. Written from within the molten crux of the enemy, “THE THREE MOTHERS” is a primordial fixation with the trilogy’s witches. Shannon’s vocals muffled by the murkiness that comes with seeking out a taboo reflection for our collective terror, sickness and obsessions are given rise by the comparatively ethereal wanderings of a darkly ambient score.
This is sincerely dark and artful music done well, that is original and it makes the listener pine for the next release. The overall sound is penetrating and once absorbed, you will be overwhelmed by its power. Nathaniel is a true artisan of many media forms and musically he excels as much as he does in any other form. The guy is a fascinating creator of the truest form and this release is as awesome at 2am as much as it is at 10am. Many artists write ten tracks for a release and maybe 2 are decent, instead, this EP has 3 tracks that are bleak masterpieces. Maybe it may take a few listens, but for the creative ear; this release has got it all, including killer cover art.
One of my fave releases of the year by a mile!!!.
Watch this:
https://www.youtube.com/watch?v=K0KsQjaGfd0
and Buy it here:
https://nathanielshannonandthevanishingtwin.bandcamp.com/album/three-mothers
Support people that actually give a fuck about every aspect of their art!!!