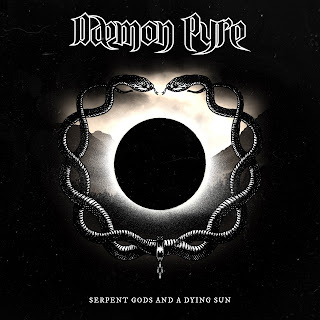 How sad is it when a groundbreaking band decides to call it quits. Sadly Daemon Pyre is pulling the pin after 6 years, after killer tracks, awesome live shows, and now this final opus Serpent Gods And A Dying Sun. This second album is very clearly a message that the band had sheer talent in truckloads and what a banger of a release. FFO: Melodic, gripping, and nasty modern Death Metal in the vein of The Black Dahlia Murder, At The Gates, Cattle Decapitation, etc, yet completely different to all of these artists. Ten tracks of inspiring and well-written metal with heart and it is both abrasive and captivating in it's intent. There is deep vitriol from the lyrics and vocal style, but oh man if you want a smorgasbord of amazing riffs this one is both a keeper and an eye-opener. Sharp gnarly riffs and war toned drums echo with every track but give this one a decent 5-10 listens before settling on any opinion. Because slowly, like the album artwork( which is sick as hell!!) the coils of the magnificent talent here show you more than some bands reveal in 15 years. The production is amazing and the album is structured to maximize your interest and keep your headbanging until the last sound. Wow, killer release and cannot wait to see what the band members do post this amazing band.
Out now!!!
Listen/watch this: https://www.youtube.com/watch?v=4c7bEknge2g
Stream/Purchase here: http://smarturl.it/serpent-gods?fbclid=IwAR12nweOlSDMDchSuD6tJeYB5zYVOnE1q5VZXJ0aK1Me6RLt6pez2WZDPdg
We interviewed Andrew from the band, great chat, and excellent input on what the band achieved and how glorious this album is.
Interview with Daemon Pyre's Andrew Lilley.

Serpent Gods And A Dying Sun is Daemon Pyre’s final and impressive heavy document….talk about go out with a bang….first thing first, why is this the end for this band?

Simmo (Simon Tattam, rhythm guitars) left in mid 2017 due to family and business reasons which we all understood. Then Sam announced he was leaving the week before we went on tour after releasing Unto a Dying World in late 2017. Again, we totally understood why, he had significant health issues and a very young family. We ended up scoring supports for Cattle Decapitation and A Night in Texas but we vowed to put playing live on the back-burner till we got the right people. We got the recording process happening then I got an offer to relocate to the US for work, I was born there and have always wanted to move back plus, after this record, I wanted a break. I managed to push back the leave date so we could finish the record. Being spread across 2 country's and 2 members with significant family commitments, we thought it best to go out with a bang.

Two classic melodic death metal album’s, you have impressed so many people in your relatively short existence of 6 years, what made this band so different from their peers?

Cheers! We really focused on being a good band, we rehearsed a lot! Twice a week and up to 4 sets per session, we had our own space so there weren't any time restrictions and our gear was already set up. And good equipment, everyone is a gear nerd in this band and has killer gear, I used several of Simmo's many stellar amps for quite some time! And we try to write good songs.

Now the album, lyrically and musically I think it is more impressive than your debut which is really saying something, it seems to push the limits of basic death metal to the edge, what I mean by that is each track is a real journey, the twists and turns were incredible? What drove this album, in terms of its message or themes and the hectic depth musically? Also how great is the production, it’s pretty polished but extremely aggressive.

Thank you dude! I'll leave Sam's lyrics for him to explain but musically, we wanted to create a record where each song had its own vibe. To go from beautiful to abrasive and everywhere in between. Having Dan Presland and Kevin Talley really opened up so many possibilities, they can do anything. But yeah, we really tried to mix and mash opposing musical ideas. Shane Edwards did all of the mixing and mastering and we went to Thailand to finish the record with him at Karma Sound. Awesome experience.

What’s next for the band post the grand finale of this release, what’s the plans in terms of musical and other plans?

I know Sam had his own Podcast with CJ from Thy Art but that's about it. We may end up writing more music together at some point.

What got you into heavy music? Why is it such a rewarding genre?

Eddie Van Halen's guitar solo in Beat It blew my mind. After that, it was 80's glam rock and got heavier from there. Metal is cathartic. It's primal. It's really passionate music.

Why is Australian metal and hardcore so impressive? Any bands you really dig at the moment?

You've gotta be good to get out of Australia, most of the time. And now that we are all connected, it's opened up the world to Aussie heavy music and there are a lot of amazing bands. And quite a few who are unique as fuck and were at the forefront of certain musical movements.

What are some of the band’s highlights for you? And also the struggles as a band?

Playing with The Haunted, Insomnium, Kreator, Vader, Psycroptic, and King Parrot. We played with a rotating group of 4 drummers from around the country at one point and were so lucky to have those guys, really great players, and a fun experience playing with all of them. Oh and we managed to get this album done, it's been an experience.

What in the annals of metal history will this fantastic and original band be known for?

It'd be sweet if people remembered us as fantastic and original.

Any final messages for your fans?

If anyone is interested, we made an album we're really fucking stoked with and hope you dig it \M/.

Cheers Andrew and Kudos on the amazing album!!.