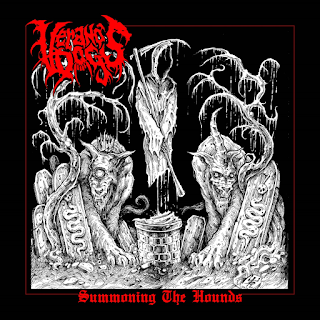 So glad this band found me. Old School Death Metal greatness. Think old Napalm Death, Terrorizer, Repulsion and you are in the right zone. Yes, a sick arse band from Rome that has a perfect album of crushing death grind. No bullshit music that makes you want to mosh and headbang. Ripping tunes, sick arse vocals and the whole album has a dog theme. Fuck yes!!!!

Verano’s Dogs is born in Rome at the end of 2015 aiming to mix the first grindcore tradition with the most funereal death metal. The band’s moniker is linked twice to the world of cemeteries: Verano is the most famous graveyard in Rome and for some beliefs, dog is the animal that brings dead souls to the afterworld.

It is heavy, pretty thrashy and every track is well written. Production was nice and crunchy. The album is addictive from the first track and never dull. I really dug the dual vocals effect on most songs, the riffs were fast and abrasive. So everything on this album hits the standards of the greats of this genre. An absolute necessity, classic yet modern brutal album. Not a single thing to fault on this release.