Maniacal-Life Is A Dark Chain of events album review 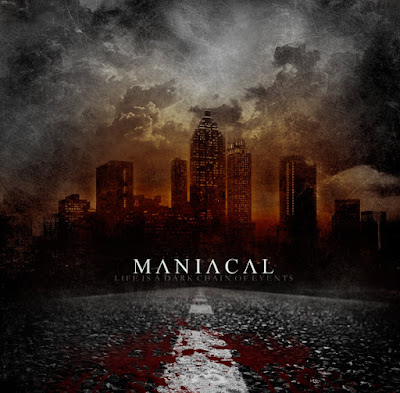 Maniacal-Life Is A Dark Chain of Events album review by Mark Jenkins.
Sometimes you wonder why some bands never cross your radar; is it because they never got the right press and coverage or because they were simply too average in a sea of similar bands. Well, this band is far from average and they should be on your metal radar asap.

Maniacal hail from Port Pirie, South Australia and they are the master of dark, yet groove based Death Thrash. To describe them I would say the best parts of Pantera/Lamb of God meets Nile/Cannibal Corpse/Morbid Angel. Yes, that diverse, but remarkably original and catchy as hell.

The musicianship and sheer skill evident is amazing. The riffs cut like a chainsaw to your ear on a summers night. The album with exceptionally well put together tracks like Release the Demons, I Am My Own God and Drive My Madness really driving home the pure aggression of this release. And the mastering by Jens Bogren, masterful metal whiz of Sweden has you floored by each track.

Since the original nine tracks, there has been a change of vocalist and now their producer is also their new singer and the last two tracks are bonus tracks with Andy on vocals. This is a great bonus as this is the new even much darker and heavier direction this band is heading to now. The styles are slightly different, Andy definitely has a more OSDM type vocal style which will only lift their future recordings from the brilliance they have achieved so far.

Great, catchy proper metal with depth. 4/5 pints of rotten blood for me.

and when it drops Dec 12 grab your copy from:
https://shadowbeastrecords.bandcamp.com/album/life-is-a-dark-chain-of-events?fbclid=IwAR3qoecy_WyGOowJNHJjBTu4YXuqOurFjMkKxYOA-j5oOEWBxhAJLQfwSPI