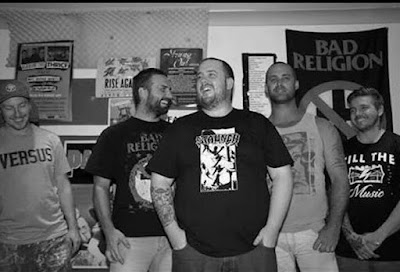 Fake News is an incredible band from the Gold Coast playing exceptional melodic hardcore/punk rock with a definite tip towards the very best of both Epitaph/Fat Wreck Chords, but done with their own creative style.

Devil's Horns had the lucky chance to interview this classic band. Enjoy!.


1-Could give me a brief history of your band, the band name and what releases you have?

We got together in about October 2017 via a Facebook post looking for members to start a 90s style punk rock band. The name came not long after. I thought it was just dumb enough to work as a band name, but apparently so has about half a dozen other bands around the world. We released a single called NO WALLS in early January and our first ep EWWWW! on August 8th via set the fire records. Both are available on our Bandcamp and Ewww! It is available pretty much everywhere you stream music.

The aggression and energy are what initially drew me in 20 odd years ago. It soon became a passion bordering on obsession. The community, the friends I've made and the experiences that punk and hardcore have provided me keep me reinvesting into this thing we have

This is a good question. I didn't really click until I was about 30 how much my taste in art is linked with my taste in music. Kieren (@nuclearwhippingboy on Instagram) Is one of oldest friends and it was a really obvious choice for me to get him to cover our artwork.

While I love bands who stick to an art style that matches their sound (particularly straight edge and youth crew bands) I love that our album cover looks like we are a thrash band, our name sounds like we are a political band, and we are neither of these things.

4- Live how does your music translate? and do you have a message or what rewards you?

We try and sound as close to live as possible on the recordings. There is nothing really on there we don't produce live. Sure some of the vocals might not be as in key after a few drinks but other than that we try and be as honest as possible. I've made a decision that with this band I don't want to push a particular message other than staying positive and trying to have some fun. We get enough shit opinions rammed down our throat in most other aspects of daily life, no one needs me telling them what to do.

We just released Ewww! On August 8th and a film clip for 20 failures. We are in writing more at the moment, hopefully, we can get some more music out sooner rather than later. 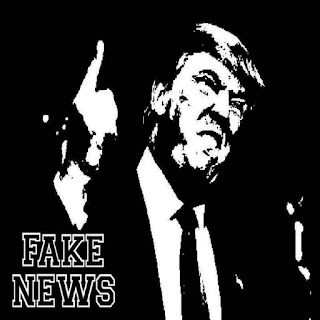 So many! It's been a great year. We've played interstate, supported a bunch of great bands and generally made friends with almost every band we've spent time with. We've also gone from 5 blokes who didn't know each other very well to a great bunch of close friends. Friendship is the real treasure.

7- On the flipside, the struggles, and challenges?

The typical work/life/band balance doesn't get easier as you get older.

Artists: Hack the Mainframe. Cold Ground. Private function, Straight-line from Germany, Darko from the UK. Unbroken shores and Nerve Damage from the gold coast. Driven fear, Vestiges, and Fire away from Brisbane and Donkeyvote from Ballarat are all pretty special.
Album: I’ve had Mindsnare's Unholy Rush in my CD player for about 8 months.

After I'm done here I'm going to go lie down and binge watch Brooklyn 99. Band wise we are going to just stay the course. Writing as much as we can, playing some shows later this year and hopefully Back in the studio early next year.

Thanks for the questions and the support. If anyone wants us to play a show we'd like a plate of fairy bread for our rider. You can book us at fakenews.punk@gmail.com 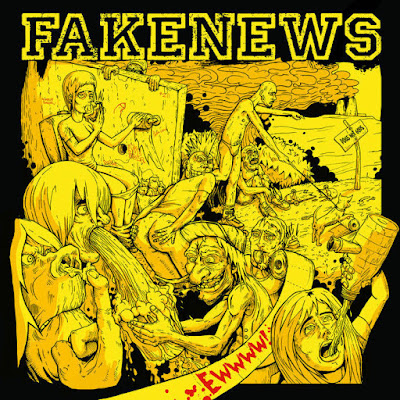 As stated above this Qld band is capturing attention from Australia and abroad because they are really, really skilled at melodic hardcore. Some reviews are lumping this band as almost generic, pidgeonholed skate punk. This writer disagrees heavily against that, they are so much more.

The essence is fast-paced, punchy hardcore with harmony. Lyrics are smart and witty and the innovation is not simply being catchy, but ingenious flow from intro to endnote. Undoubtedly great songwriters and musicians working in beautiful form.

Opener Backwards Hats and Black Tshirts illustrates this perfectly, this is a band that needs to play the bigger stages already. Lead Balloon carries this thru with astounding and almost epic mosh pit craft. Tiny Chin Guitars is as great as the best One Inch Punch and Bodyjar classic tracks. 20 Failures is the killer gem of the album and a worthy film clip has been released to match it's raw grandeur. Of course the 49 second punk as majesty of
A Trip to Toowoomba to Pick Up a Cat cannot be understated how wondrous this song is.

Ewwww! is a stellar EP and 4/5 Harmonious Hugs by your mates at 2am.

It's out now and you need it.

Album launch is 7th of Dec, be a early xmas cracker of a gig. 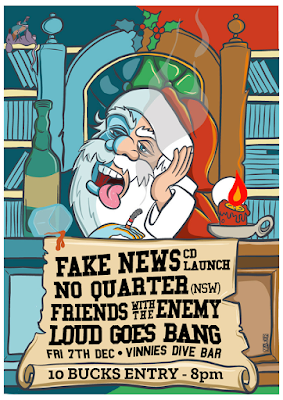