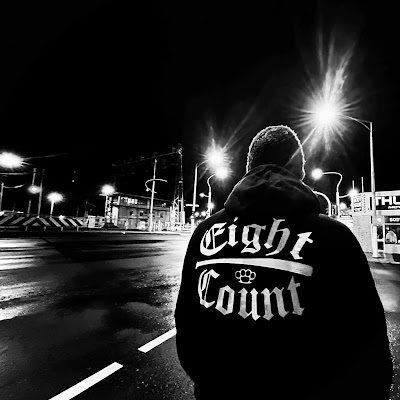 Frankston is churning out the killer bands in Melbourne Hardcore and also two of the best Aussie bands at the moment: Fever Shack and the mighty, crushing Eight Count. This band has reached for the stars since arriving, a confident and brutal demo kicked stuff off, followed by signing with the ever-productive 1054 Records stable and dropping a debut EP for them which has got the attention of hardcore fans worldwide. And the new EP, hahaha let's make it clear you ain't ready for this explosive release. Everything is angrier, with tons of new flavours and that gritty Eight Count that is the foundation of what real hardcore is.
So why is this so great: first up the stellar production is huge sounding, yet remains acidic and jumps out of the speakers every time. All the previous songs were very decent, but this shows more progression and maturity and adds some touches that make it exceptional. There is more groove on this EP, and the guitarwork has a definitive offensive tone that is overwhelming in the best way. Harley has constructed some of the most savage riffs in combination with top-class bass and drums that absolutely sound like ten army battalions, and Jacob has added clever vocal tricks on this bold release. This is a huge release for Australian Hardcore. 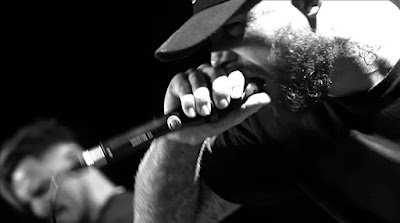 Opener Only the Strong opens up the pit like a machete to your abdomen, no pissing about from the moment you hear the caustic vocal I MUST FIGHT!!!!. The tone is pretty dark and the pace is unrelenting, I also dug the Pantera vs Hatebreed vibe on this. Hell of a way to start off a brilliant release. Time and Time follows through on the perfect formula of balanced tempo, some cool beatdown vibes and Harley's added nuclear-powered backing vocals. And for a hardcore band, they cram so much into each track, with wicked harmonic riffage aka Mindsnare and even some Biohazard vibes. Plus the end breakdown is so thick and hectic. Another killer technique this band used on this EP is each track flows or slots into the next track so well. This plays out effectively like a killer set from your favourite band, man that is hard to achieve, so much kudos and love for that approach. 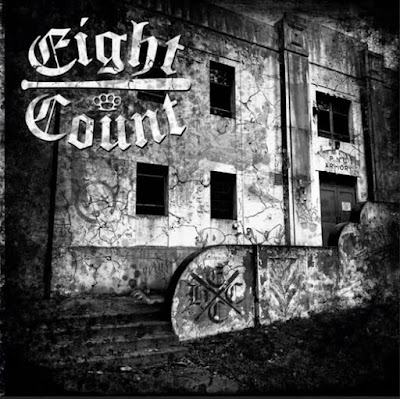 Dead and Buried adds that Biohazard groove again mixed with Terror-style chunky hardcore confidence, I may be repeating myself, but I just am amazed at how much they cram into each track. Also, check out both videos for Time and Time, and Dead and Buried; both are excellent quality and have that real underground vibe that is legit. Then comes my favourite track by a mile, the glorious Extinction. What a sensational track, this has essentially all the stuff I adore about hardcore and even has some crust hardcore vibes as well. The build-up and tension on the whole track is incredible. But the main riff is the biggest hardcore earworm I have heard in ages. And this track showcases how far this band has come in such little time, each release has built on the previous but in a monumental and layered way. It has moved from a very likeable Madball style on the first demo to a deep, broad-ranged metallic style that is very multilayered and I can even hear some southern metal in the mix; which I know Harley is a devoted fan of. This also hints at what is coming from this band in the future, already hanging for a full album even though this EP has just dropped. They close it out with Outro and they surprise you with really psychotic vocals and even almost pig squeals. Plus gritty riffs and more sonic violence via the skillfully punishing rhythm section. Also, I loved the solid lyrics on this release as well, again skillfully written and showing progression each release. Everything is so damn promising for this band. 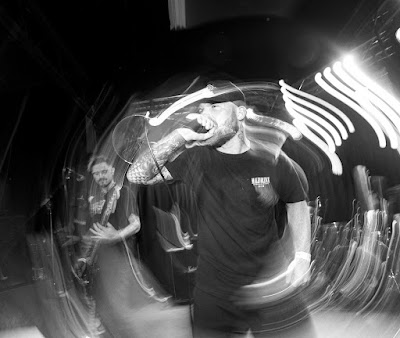 An absolute winner's flag in the battlefield of heavy music, Eight Count is definitely at the top of its game and Hard Dose of Reality is utterly essential for Hardcore fans everywhere as this is easily one of the best Australian Hardcore releases in the last ten years, maybe much more.
Support this band hard, as they are all brilliant humans as well as amazing musicians.
Out now:
CD
https://1054.bigcartel.com/product/eight-count-hard-dose-of-reality-cdep-digipack
DIGITAL
https://1054records.bandcamp.com/album/hard-dose-of-reality-ep
Watch these videos:
https://www.youtube.com/watch?v=HKr8SXtICsw
and
https://www.youtube.com/watch?v=pLPqA3XlZpI
Get Antisocial:
https://www.facebook.com/EightCountOfficial
And now a killer interview with Harley(plus input from the other dudes): 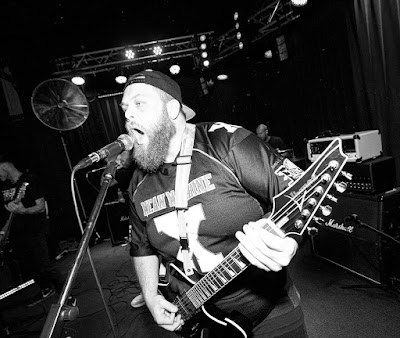 How’s it going brother?, for a band that has only been kicking around for a few years you have achieved so much as a band and your global reach and the release of the sensational Hard Dose Of Reality EP next week, what’s the vibe in the camp these days?

Really good mate! Yeah, it seems like a little bit of a dream, everything has come as a bit of a shock but at the same time, we’re not surprised because of how happy and proud we are of what we’ve written and achieved in that span of time! The vibes have been all around positive like it always is!

This Ep shows tons of progression from the highly rated demo and debut EP, there are tons more elements, some groove, some beatdown and more aggression, give us the background to this release and some of the themes on this release, also is it fair to say the influences on this are way different as well

The shift in influences has been really good, it’s the only way to expand and grow as a band and as people. The reality of it is, we’ve just been writing music that we want to hear and pulling inspiration from Mobb Deep and MOP to Paleface and Kublai Khan TX! It’s been an amazing writing process, you’d be surprised at how quickly these songs came together, I think that’s when you know you have a winner, it all just falls into place! 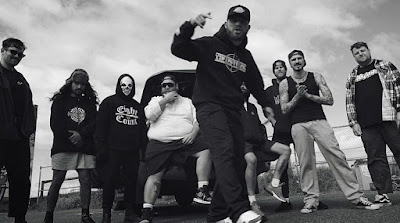 You recently dropped sensational and dope videos from this Ep, how fun were they to make? They came up amazing!

Those videos were an absolute blast, a little stressful as everything can have a tendency to be, but all in all, they were heaps of fun, the amount of footage that wasn’t used was unreal too for Time and Time! For the video on Dead and Buried, that was a little surprise from the videographer, it was all just footage from backing up Xibalba! 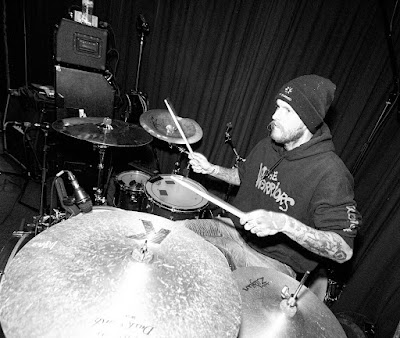 Eight Count have had some lineup changes (like any band tbh), but now this seems to be the definitive lineup, would you agree?

Just like anything in life, it's all trial and error, what works, and what doesn’t. In my mind, I can’t actually picture a better lineup than what we have currently, we essentially merged 2 bands into 1 because of the sheer love of hardcore and heavy music! It seemed like a bit of a crystalizing moment when the opportunity came up to merge Eight Count and Black Monroe! 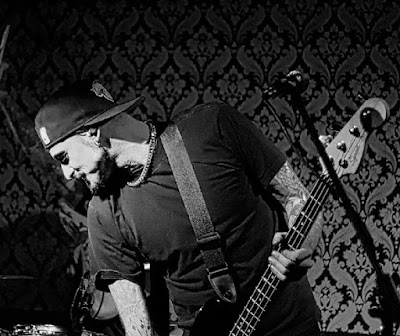 Frankston, your homeland or battleground seems to be an absolute fertile ground for hardcore given the bands coming from there, what makes Franga so gritty and real, and a pure foundation for killer hardcore

I think Frankston has always had a thriving scene for punk, hardcore and metal because of the diversity of the people living within it, Frankston has always been somewhat of an outcast working-class suburb of Melbourne which as a result has always then produced the same kind of people and therefore new bands looking to express that feeling

This release has the add evil vocal pipes of yourself on this release, this as well as crushing gang vocals that make this EP sound so forceful and necessary. Thoughts?

It adds a different contrast to the sound, between myself and having Matt doing backings for live as well, it makes a really big difference! Even in saying that, Jacob’s vocals have changed quite a bit too in a positive way!

What’s coming up next for the band? Are there plans for interstate tours and also a full album? How's life on 1054 records?

Right this second, there’s nothing set in stone, just awaiting this release and letting people enjoy it! We’d love to be able to travel interstate for good hardcore shows and make a heap of friends along the way! I’d say a good east coast tour is likely to be first on the list! 1054 records are killer!! 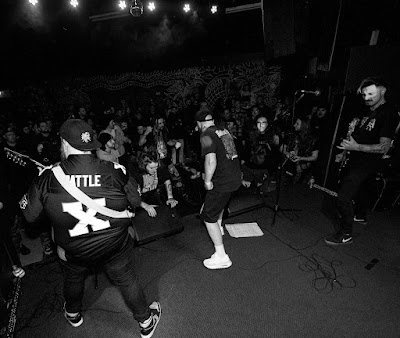 Any messages for your fans and supporters out there? Also, shout out to any bands or albums you are feeling atm!

We want to thank everyone for taking the time to give us a listen and for all the amazing positive feedback we’ve gotten so far, we couldn’t be more grateful for it!

There’s so much amazing talent in this scene and country, it’s actually unbelievable, bands such as;

Fever Shack , No Peace, Terminal Sleep, Heat, Crowned Kings, Mindsnare, Outsider, Speed, Horsepower, and pretty much any band coming out of Singing Bird Studios in Frankston.
I know there are so many bands I am missing, I could go on and on about because I love the scene so damn much!
Thanks, Man, and all the best for your very solid future, HARDCORE FUCKING LIVES!!!