Hatebreed-Weight of the False Self album review. 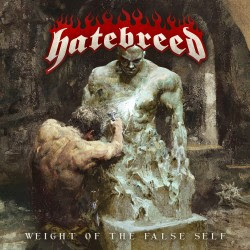 Hatebreed-Weight of the False Self album review.

FFO: Hardcore, modern metal and motivation.
Hatebreed is a classic hardcore/metal force for ages and with reason. They always deliver with the hardarse riffs and breakdowns and damn motivating lyrics. Indeed their initial two albums were certified classics and although they have definitely added more metal to the mix since The Rise of Brutality dropped, the epic heavy tone of each album has been impressive. Personally, I think a few albums in the middle period were way too similar riff and lyric-wise, but that's cool. Think of Motorhead, not exactly a fuckload of variation over their entire recording existence. But no wanky genre change or move to be popular, but truckloads of gnarly music. 2016's Concrete Confessional was an excellent album and my fave since their last great album which for me was Supremacy. Concrete also had some slight musical changes adding to the solid and basic Hatebreed formula and Weight of the False Self follows on with this. Subtle tempo variations, vocal twists and groove make this a madly addictive release.
The album overall consists of two types of songs and that is classic, catchy and anthemic hardcore with metal influence and tracks that progress slightly out of this realm. Not greatly, but add some new additives or sauce to the main meal. Tracks like Instinctive, Let Them All Rot, Set it Right, the title track and a few others fit that mould. None of these are weak or generic, yet are hardly groundbreaking. But all are utterly solid and entertaining and will motivate you with the usual solid Jasta type lyrics. The five or so other tracks, make the album more balanced. And that's not hanging on this band, but again with the Motorhead analogy; I need some spice to make deviate from my fave albums of a band I adore. Cling to Life, A Stroke of Red, Dig Your Way Out and The Herd will Scatter make this a fantastic release.
Eight albums in and still remain my fave workout music.
Buy it here:
https://www.nuclearblast.de/en/products/tontraeger/cd/cd/hatebreed-weight-of-the-false-self.html
Watch this:
https://m.youtube.com/watch?v=zgEPyvpUDdg