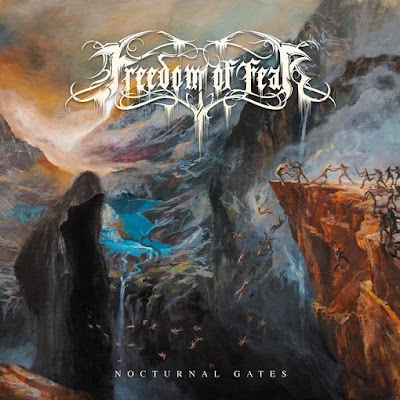 Only a few albums so far in 2019 have really blown me away by either sheer aggression or the unexpected joy of frankly being shocked at the surprising greatness. This can be a band dropping a great release after a few mediocre ones or a new band that drops a release so epic, you hit the floor with the shock.
Freedom of Fear, I lay at your feet.

This five piece metal tour de force hails from the city of churches, Adelaide. Not that any of their unholy hymns sound remotely peaceful or as a pathway to religious glory. For a reasonably young band who have only been around for four years, the future looks incredible. EVP recordings built the hype on this band, but this is completely warranted. This is peak extreme metal with pretty much the best-written songs this writer has heard in like 10 years. 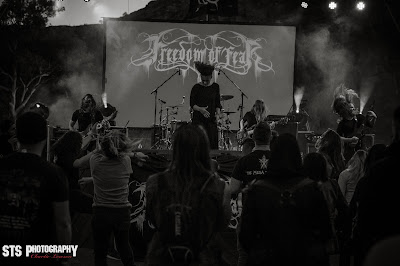 It is actually amazingly hard to pinpoint the exact separate parts that make this easily one of the albums of the year. One massive standout is the superb song structure throughout the entire release; many bands that have been writing for 20 years struggle to even touch the sheer craft of this band. Built within this is an amazing touch of drama that flows perfectly with incredible tempo changes and buildups and sonic crashes that will astound you. And it doesn’t let up for the entire album.

Musically it crushes most international acts. The guitarwork is razor-sharp and whether it is a quiet moment in a song or a raging solo, it is so captivating. And again this writer struggles to comprehend how a band so young can construct such a damn masterpiece. Add to this absolute skin ripping and searing vocals that will echo the greatest vocal work since the early death metal classics. And as I mentioned previously it all melts into a flawless extreme music document that makes you breathless. Genre-wise, why waste time making comparisons to this band and that. I believe they have a stellar knowledge of most metal genres and have created modern death metal with beautiful atmosphere and guile. I can’t pick my most favorite tracks, but it has to be said The Consciousness of Misery is one of the greatest 7:21 minutes of metal glory you can possibly imagine with sprinklings of melodic death/hardcore meets black metal in a bare knuckle brawl with abstract jazz and grindcore. And that’s no exaggeration!. It is absolutely incredible on every level.

Or take the staggering Amorphous that tricks you into thinking we have a twee groove metal influenced closing track, but quickly rips you a new one, by introducing you to tempo change warfare of the highest standard, then at around 4 minutes fucks with your head even more by dropping a creepy yet shattering solo that escalates into pure mayhemic metal armageddon. You will have to pick yourself off the floor from the impact this album will leave on you.

Sheer metal masterpiece is no understatement here. Listen, buy, steal, beg or borrow to get this brutal majestic release that is without any doubt one of the best albums of 2019!.

Watch this:
https://www.youtube.com/watch?v=7JQR9FC7ZAs
And
Grab a copy via EVP recordings, it’s out right now.
https://evp-recordings.bandcamp.com/album/nocturnal-gates-2