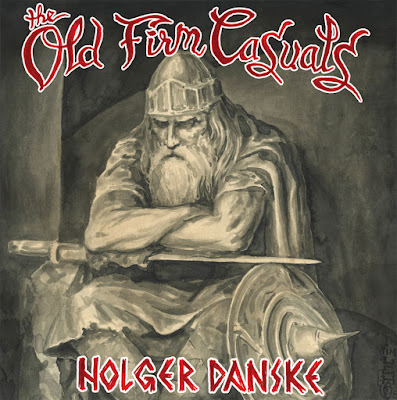 Rancid and frankly post Rancid releases by various members has been very hit and miss, but Lars has released this fantastic street punk release a month or so back and I dug it heaps.

I was pretty impressed about his statement about this record as well:


"I’m really excited about the new The Old Firm Casuals record cover art and music of our soon to be released record called Holger Danske. I wanna thank Tim Lehi for drawing the cover and doing such a bang up job with everything. This record is humbly dedicated to my late uncle Viggo who fought in the danish resistance group Holger Danske against the Nazis in WWII. This record is very very personal to me and the boys in the band. My mother over the years shared stories of Viggo and her time growing up in Nazi occupied Denmark. Some of them too graphic and vile to share but overwhelmingly moving none the less. Fighting Fascism of any sort is a cause I believe in and always will. It’s a family trait I guess. Do yourself a favor and research Holger Danske be it The resistance group or the man himself. Or check him on the Danish National Team Jersey (we are red and white we are danish dynamite) from the last World Cup. Lastly I’m a Pagan born and bred and the lyrical content on some of the other songs will reflect exactly that. Lars "

On to the album, it's a solid street punk album with all the good stuff. It's very angry and heart felt as well as remaining catchy as fuck. The tempo is fast and it's more street punk than Oi! tbh and it is as good as Lars and the Bastards albums which I loved. Combining football hooligan punk with some serious Motorhead worship and even a touch of early AC-DC. It was extremely entertaining and probably would have been better as a 10 track release, but it's worth your time and better than the last 5 crappy Rancid albums. Lars was always the most talented guy out of Rancid and it shows. It's as good as the peak Dropkick Murphys and Street Dogs.

Fave tracks: Motherland, the title track, Get Out of Our Way and Nation on Fire.

Out now on Demons Run Amok