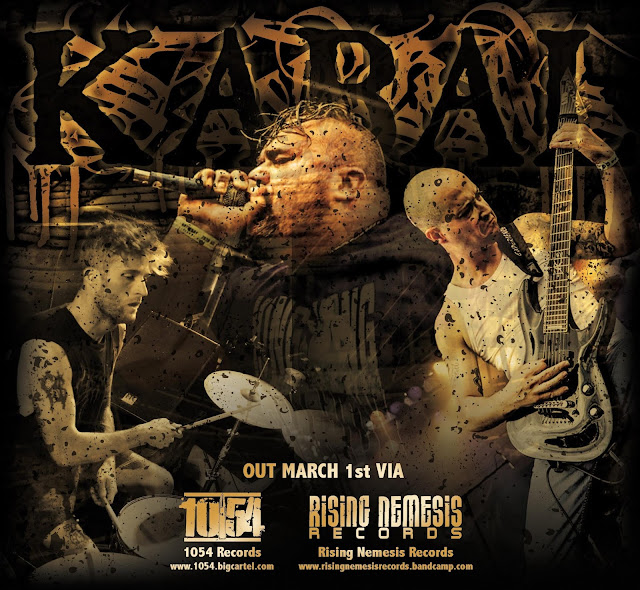 Straight out of Europe Peter from 1054 Records has dropped this total landmine of an EP by the heavy as hell Kabal.

Bio:
KABAL are a 3 Piece band founded in 2017 by Italian friends Matteo Bazzanella on vocals and Max Santarelli handling guitars/bass & backing vocals. With both guys coming from the brutal death metal /slam scene with Matteo fronting Indecent Excision and Max with Vomit The Soul they formed KABAL with the intent to create brutally heavy metallic hardcore with plenty of groove & dark urban vibes. Add in German drummer Basti Ma, also of powerhouse outfit Carnal Decay & this trio are primed to deliver some seriously heavy stuff !!!


In the summer of 2018, KABAL recorded their debut self-titled EP consisting of 6 crushing tracks which will be co-released on March 1st, 2019 by Rising Nemesis Records (Germany) & 10-54 (Australia), It is a seriously heavy EP that sits perfectly between many genres for all fans of Death Metal, Hardcore, and Slam. It is not subtle and the type of music people kick the shit out of each other too. FFO: Xibalba, No Zodiac and at times classic Sepultura.

All six tracks are heavy with an amazing undercurrent of groove, in a way that reminds me of Biohazard. By no means in any way original or groundbreaking, but this is the type of music I personally pop on to fire me up before a gig or when I hit the gym. Meaty, pulverizing knucklehead music that makes you want to mosh hard or at least throw a hot coffee at management at your work.
All siz tracks are heavy and crushing, my faves were Disciple and Nailed Down

I dug this and really are looking forward to a full album of this skillfully aggressive masterful band.

Hit up 10-54 Records on the pre-order.
https://1054.bigcartel.com/product/kabal-kabal-cdep?fbclid=IwAR3XWOQaZ8O-z-G3C4SQ1YbU3q81FMoI8b-iybWNGugXhQtcEKde0qoSl5s