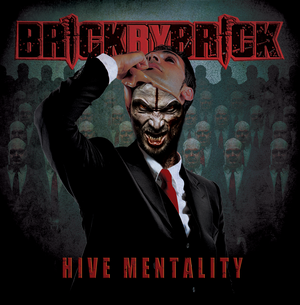 If you put the heaviest of Hardcore and Thrash Metal in a blender, you would get the elite album that is Brick By Brick's Hive Mentality. It delivers so well because it really showcases how things should be done in a modern hardcore album. Well written, catchy as fuck and never dull.

Born out of Troy, NY’s infamous hardcore scene, BRICK BY BRICK - Mike Valente (Guitars), Andy Parsons (Bass), Ray Mazzola (Vocals, ex-Full Blown Chaos), and James Muller (Drums) - have relentlessly cultivated their reputation as a staple force of hybrid hardcore metal. Solidifying and reviving their sound in recent years with the addition of Mazzola on vocals, the band’s perspective is fresh with formidable intent. Produced by Jason Bourdeau, the album was recorded at Overit Media in Albany NY, with mastering by legendary Alan Douches of West West Side Music.

The band is masters at their craft, but Ray (ex-Full Blown Chaos) has really lifted the band to the top of their game with his abrasive vocal delivery on three solid albums. But the riffs as a Brick By Brick trademark make every release a must have. There are always some serious hooks and driving chainsaw action on every track. And the guest vocalists aren't cumbersome like so many albums wrecked by guest appearances, they just enhance the classic approach to musical violence BYB swear by.

Vocalist Ray Mazzola says, “In was an honor to have our guest vocalists join us for this album. We wrote it knowing all along that Tony from Municipal Waste/Iron Reagan was going to sing on a ‘Bar Is Open’, and it turned out that a few of the more thrash-edged songs were inspired by him. Vincent of The Acacia Strain agreed to redo an old tune of ours, ‘In The Ruins’, that was featured as a limited edition run that he collaborated with us on. It needed to be heard internationally. Last but not least, Jessica Pimentel from Orange Is The New Black/Alekhines Gun was a perfect choice for the middle rant on ‘Hive Mentality’, portraying anger from a woman’s perspective.”

Sounds awesome, well that's an understatement on all levels.

In one way a slightly brief album lengthwise, but more so an album where all the filler and unnecessary nonsense is cut out with a blow torch and a focus on streamlined and brutal hardcore is maintained. But whilst I really enjoyed the two cover songs (Skid Row and Motorhead) on the album, I would have happily swapped both for an extra BYB track, to be honest. But that's being really critical as the album is so damn exceptional.

and local copies in Australia:
https://1054.bigcartel.com/