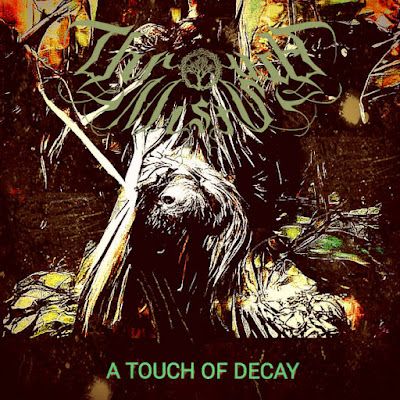 Again Twitter found me this killer band. Now Through Mists is an experimental and conceptual extreme metal band from Montreal and over these four tracks I cannot pigeonhole this band and that's fucking cool. I mean the title track bounces from weirdo keyboards and vocal gymnastics that sit between Mr Bungle, Nordic Black Metal and even Nu Metal; but in a cool way. I literally have heard no band like this. A Touch of Decay is one hell of an entertaining ride. The three other tracks are as insane as the opener, the song structures are weird and all over the place. But it works well, in Cacophanous Echoes you have Sesame Street's Cookie Monster on lead vocals and absolute war-like riffs balanced by some clean and symphonic-like secondary vocals. But none of this is a novelty, it's just wild extreme metal that is delivered well. The second track even has some crazed 80's keyboard stuff on it. The third track The Hunter's Bounty is like a charging bull and has some great riffs that are tech as hell. My fave track after the opener is the killer closer Rot which starts off as a deranged horror movie with wicked off time keys and excellent death metal vocals and is clever and so dark, but pretty dynamic. I dig how you really need to concentrate on where the track is going, it may hurt your brain but it's well worth it. This excellent band has a few releases out now and all are worth checking out. It's a killer release, my own small suggestion is production-wise, the treble needs to be less and more of that earthshaking darker tone because vocally this is where most of each track is focused on, but that's my own shitty non-engineer guy ears( and I am obsessed by deeper tones on all instruments including vocals) This is super original and a cracker of an EP. And this band is keen to constantly release stuff and that's a band a love...gimmee gimme more!!!.