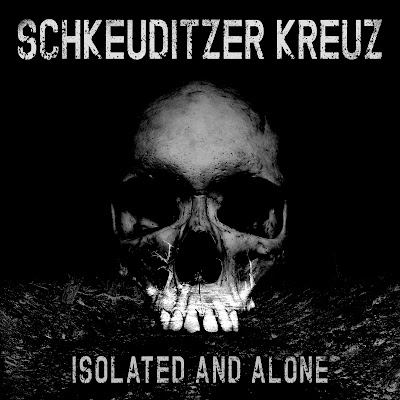 Australia continues to set the standard for extreme music, pretty much year after year. This one-man assault declares this premise perfectly. And the bio is very clear in intent and purpose:

Schkeuditzer Kreuz is one human and some machines, making noise, in the face of it all.

Live electro-industrial punk created out of the wreck of the plague year 2020. The human element of SK has been playing stringed instruments in punk bands since the days when the world had happiness and hope. Since the decline, there has been a building of greater affinity with machines making the creation of SK inevitable.

The name Schkeuditzer Kreuz comes from a motorway intersection between the A9 and the A14 in Sachsen, Germany – the sign for which was glimpsed out the back of a moving vehicle while escaping Leipzig many years ago. The sound and feeling behind SK is based around that signpost.

S.K. in essence, but with a whole palette of deep angry textures, skills and exploration of dark themes are a machine-driven industrial punk band or as one of the EP’s was aptly named: D-Beat Raw Synth Punk. And the album from start to end is a raging beast of a release.

Broken opens the album with a killer mental health-related sample and it personifies the ethos of this band; excellent dark electronica seemingly forced through tons of distortion. Hardly surprising given Kieran who is the protagonist here has been a force in many crust/punk bands; including the mighty Dark Horse. This band echoes more Laibach/Einstürzende Neubauten/Front 242 than NIN or Ministry and that is a bonus edge to this release. Warning is definitely more punk than the opener, but equally dark and grim. For a true DIY project, many things stand out quite clearly-Kieran can utilise the Roland/other equipment like an absolute expert, the samples are outstanding well situated in each track and the song structures are clever and very emotive. The album seems to be a release from a band that has been around for ages, given the skill level shown here. Overall it’s confidently grim and evil sounding but is hugely dynamic. The production is exceptionally loud/purposeful but really spot on. Again S.K. is that fantastic intersection between crust punk and hard industrial synth. Nothing over dominates the mix and the balance is awesome.

Wraith is up next and is clearly foreboding and the mad sample utterly draws you in. This is absolutely one of the darkest tracks and that pounding drum beat did my head in, I loved it. This also raises another positive element of these tracks, whilst it’s very punk/underground driven, sometimes it has that euro, almost trashy industrial dance beats/tone that absolutely fucking rules. Next up is an insanely sick Discharge cover that could easily fail, but it simply bathes itself in the banner of rocking hard and is a harsh industrial ripper, particularly the middle electro solo chaos-utterly eccentric and catchy as. Interlude is actually not an interlude, thank fuck for that I hate those lame 20-30 sec dumbarse breaks in between an album that serve no purpose. This is evil almost psychedelic bush doof techno with some killer abrasive beats that work perfectly with both the samples and the nasty vocals. This is a track that grows and grows, one of the finest moments of this release. Plus it has a wacky, but killer ending. Disappointment is the opposite of the title as the 6th track of this album and again this is a morbid track that is atmospheric and it builds so well. The last section of the song is fantastically epic. Again the intelligent songwriting and sheer skill level are amazing and this is one to be played on repeat frequently. Traitor brings us almost to the end (sadly) and both the live percussion is industrial magic as well as the startling combination with Cambodian funeral music to work in a unique, yet stark way. That’s why the album is great, it mixes up the styles and has some clever variations across the tracks. Last Dance is the final track and an excellent closer. This showcases how refined yet unhinged this project is. It is chock full of solid drum beats, outstanding key play and insane vocals that are moody and dynamic. This is perfect for a pub or a seedy club venue.

This band is doing something way different for extreme genres, it’s also amazingly original and heavy as hell. When this drops later this year, this is an essential purchase.

Album will be here(plus hopefully vinyl):