Favorite tracks; Monotonous(ironic as fuck as the song is diverse and gripping) with its amazing riffs and pure impact vocals, Material Illness(lyrically the best track I can recall in ages across multiple genres) and Inversion were my faves, but there is literally not a nanosecond of weakness here, It's actually crushed most major label bands releases for the last 5 years as it's so honest and genuine in its thrash nastiness.

I suggest getting it asap, it's a certified classic.
https://tempered-glasgow.bandcamp.com/releases

And here's the interview I did with this killer band with
Beck (Rhythm Guitar) .


1-Could give me a brief history of your band, it’s name and what releases you have?

Tempered came about in 2018 after myself and Dave (drums) had been jamming for a few months on our own. We previously played together in a thrash band called Blackout in our late teens/early 20’s, and after playing in various different projects over the years separately, we both thought it would be cool to go back to our thrash roots and put together some material that was faster and more aggressive than what we had done previously. We had pretty much finished arranging the music of the EP and we brought in Aaron (vocals, Chris (Lead Guitar) and Andy (bass) respectively, and everything came together better than we could have ever imagined. We decided on the name Tempered as it was kind of a double meaning. It had the metal factor of tempered steel, the process of hardening steel which reflects our idea of making hard as fuck metal music, but also bad/hot-tempered which reflected our idea of making angry aggressive music. We tied up all the loose ends and released our debut EP ‘Greenwashed’ in February of 2019, and we’re really proud of it! Phew! Brief, eh?

2- What drew you to hardcore/punk/metal (etc) and why is it such a rewarding and sustaining genre of music to you?

First and foremost, we all cut our teeth on heavy metal. Like many people playing this kind of music, we discovered bands like Metallica in our early teens and it was all over! Playing and recording music is always a rewarding endeavor, to us there’s no better feeling than using every ounce of our collective musical chops to make music as painfully fast, aggressive and angry as we can! Some of us have played in hardcore and crossover bands previously, we were really drawn to the DIY attitude of the punk scene. Music is about people and being part of a community of bands and friends who all help make things happen is just amazing. We’re so fortunate to be a part of something like our local music scene!

Our music is our art! We’ve tried to make the subject matter of our material really mean something, coming from our thoughts, concerns, fears, and experiences. We absolutely love all the dungeons and dragons nonsense in metal, but for Tempered we personally feel that pouring our hearts and souls into our music makes it true art. I have to give a shout out to Hester at Hester Aspland Artwork, who took our concept for the cover art and turned it into the gnarliest looking shit ever! Check out the ‘Greenwashed’ artwork for some badass eco-zombies!

We are primarily a live band. What you hear on the record is basically what you hear when you come to a show. The general message of our band is positivity, whether it’s talking about mental health or the pollution of the planet - there’s light at the end of the tunnel. Strive to make the change in yourself and come out a better person. The power is yours!

5- Any upcoming releases or tours you would like to tell us about?

We just released ‘Greenwashed’ so we’ll be promoting that for the foreseeable future. We have some plans to cross the border this year to play down south - Leeds, London, Cardiff.. maybe even catch a ferry to Ireland and hit up Belfast and Dublin. 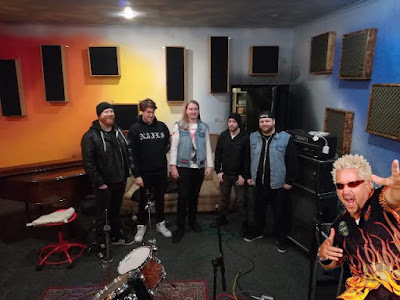 To be honest, the band itself has been a highlight. In the short time we’ve been making music together we’ve really forged great friendships and kept each other sane during the hard times. It’s been a real blessing for me, personally. Lovely boys the lot of them.

Mostly just the usual band stuff, especially for a new band. Putting a lot of money into getting the proper equipment, merchandise, fitting time in around our personal lives. It’s never easy, but the rewards are worth it.

I can’t even think what everyone is currently listening to! There’s so much great music coming at you daily online that sometimes I find it hard to keep up, to be honest. We are always sending each other links in the group chat to stuff we’re into, it never ends. Andy has been on a bit of a black metal kick at the moment, as has Chris. Aaron is always popping about new hardcore and death metal shit, whereas myself and Dave mainly spend our time listening to classic rock on our car journeys. Can’t beat a classic sing-song! At home, when I’m not religiously listening to Rush, I spin a lot of classic thrash and death metal when I’m alone like Demolition Hammer, Coroner, Gammacide, Sadus, Grave, EvilDead, Sepultura, Death.. the list goes on. I love finding bands that are new to me and absolutely flipping out that I had no clue this shit existed! I recently discovered Holy Moses.. holy fuck!

Get down to writing EP number 2, harder, angrier, faster. We’re determined to top the last one! 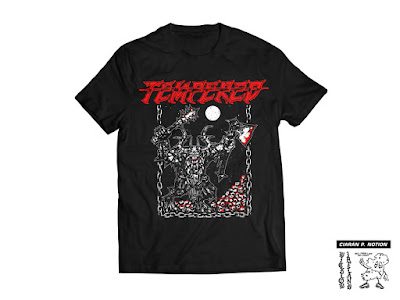 Order this rad t-shirt on their bandcamp.