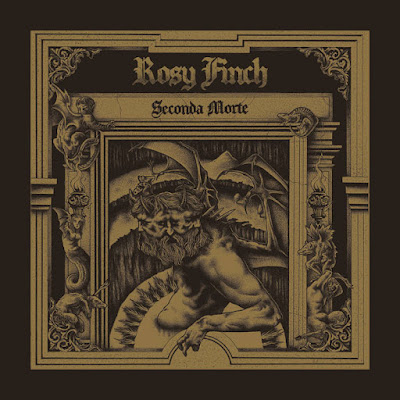 This EP that just dropped is based on the famous poem The Divine Comedy and it is as deep and entrancing as that literary gem, but it will audio-wise crush you with its intelligence and guile.
This release ultimately builds on the 2019 Scarlet album that I loved but adds many more angles combined with a more robust production approach-more earthly yet aggressive. This is a fantastic addition to their already sublime catalogue. Sit down and listen deeply to this gem!.
Selva Oscura is a glorious instrumental opener and a very serious 5:18 opus, that is brooding, eerie, stark, and gorgeous in its intent. As I said, sit back and throw those proper headphones on and let it sink into your being. No, I am fucking serious. Inferno leads on perfectly from the resonating build-up and builds a fire, by being shoegazer-like and equally moody. This has a style reminiscent of PJ Harvey etc but is combined with a black metal tone, that leads into a doom-ridden bombastic burst of grunge harmony meets extreme metal.  Like an evil cake, the lead singer's vocals blend so well with harsh backing vocals to give a vibe of L7/Lunachicks/Hole in a war with Dark Throne. Sounds like it would be a mess, but it's completely the opposite. And this quiet vs loud warfare is such a reward for the listener. This track really grabs your attention and has so many wild gifts like brilliant fuzzy guitars and crushing bass mixed with flesh-peeling vocals that can also go indie and angelic in one section and evil in the next. This track showcases how huge the talent is from this band. Wow, what a song!. 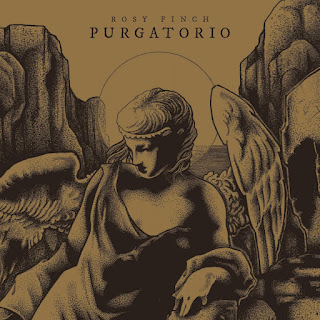 Purgatorio again takes you on an incredible rollercoaster with some really buttery riffs that caress you and the vocal interplay across the track is amazing. The underplayed melodrama is very subtle, but slowly you feel the grim tone change build and the track is quite dynamic, but equally a festival-type song that is very appealing. It is a short, but a deep track that is very catchy and a real classic. The video linked below is amazing as well.
Paradiso is not only the longest track on this captivating release but probably the most diverse and rewarding track on it. This like the second track is absolutely magical, full of sharp guitar work and splendid tempo changes. The beginning is almost The Cure type of wispy guitar style, which is then vocally punctuated like a sonic weapon, that is unleashed on a small animal. And the long duration works so well as the intersection of grunge, punk and shoegaze riff wizardry is so purposeful and well thought out. The song also reminded me of one of my fave Britpop bands Lush and lush is definitely an apt description of this track. But that lovely mix of melody and distortion defines this song, and easily shows how this band celebrate genres they love and add those flavours in; whilst remaining original as hell. These influences colour their sound and it builds a refined and serious soundscape of wide depth. This shouts to a band that will have a long and sustaining career that gives the listener so much, thus guaranteeing long listenership. Solid as always and completely outstanding. Rosy Finch is one extraordinary band!.
Out now(and buy every release!!!)
https://rosyfinch.bandcamp.com/album/seconda-morte
Watch this:
https://www.youtube.com/watch?v=iotNW0ITZJ8 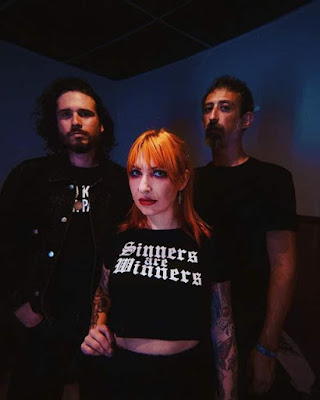 Greetings, I am so happy to hear this new EP as you know I love the incredible Scarlet lp two years ago? But this four-track EP is as chunky and shattering as that, what has been happening since the last album?
Óscar: Well, since the last álbum actually a lot of things have happened. During the recording of Scarlet the band was involved in a process of change. Two of the original members left the project when the album was done and two new members just entered to play the live shows we already had booked. But then the pandemic hit us and we had to stay at home when we were supposed to be touring around Europe playing Scarlet live. Luckily 2022 has been quite better and we compensate ourselves by playing at great festivals and nice venues and having a great reception from the audience. We also had the opportunity to write new songs and capture the sound of the new line-up with this new EP.

What are the themes for this EP? It is definitely a solid mix of quiet and almost absolute psychosis? By the way, the production on this is sensational, really deep and soaks the sound into your brain.
Mireia: We think that our new EP “SECONDA MORTE” is our most different work because it is a concept album in which we’ve tried to capture the essence of the excellent piece of literature “The Divine Comedy” by Dante Alighieri. It’s a musical journey divided into 4 tracks where the main character Dante travels through Hell, Purgatory and Heaven to reunite with his deceased beloved Beatrix and find the faith of God. Of course, the soundscapes and the mixture of intensities have been essential to reflect musically the whole atmosphere of the poem. The sound in Rosy Finch has changed in general because this is our first recording with me and the guys (Oscar and Juanjo) together. We have connected in such a special way composing this album and you can smell it just by listening to it. The production has been totally different from the other albums because we have worked together as a team in every step of the process and each member of the band has contributed personally doing their part but always cooperating with each other.
The cover art is sublime, what’s the background to this, it’s a cool hint into the depth of this release?

Mireia: The handmade cover of Seconda Morte is one of the three illustrations made by the brilliant artist Key Svn Cvlt who is totally immersed in the universe of the Divine Comedy. He has many dark influences from art and music and he perfectly understood what we needed for each part of the album. The cover is the most important piece because it represents the Inferno of Dante and the beginning of the EP. The illustration shows the gate of hell surrounded by monsters and demons with Satan and his three faces trying to get out of there with Judas Iscariot inside his hand. In the back can be seen the nine circles of Hell. This graph represents the first part of the literary work called “Inferno” which is also the second track of our album. 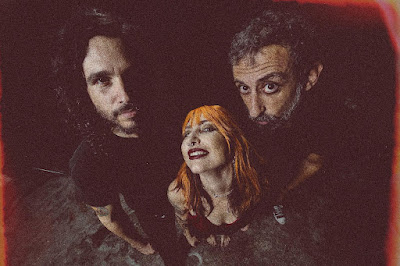 What is your favourite track for this release? The release is super varied in tempo, style and tone, but still very much RF, but seems very grim to my ears? I love the mix of indie/alternative rock paired with almost shoegaze brilliance and at the same time pure punk/hardcore vibes.
Juanjo: We really love the four songs! But probably Purgatorio could be our favourite, cause we chose this song as the single. Inferno has many different tunes and tempos, showing our metal and raw side! But... Yes, we tried to mix different styles as a four-tiered grunge-shoegaze-metal-rock sandwich.

Are there any videos planned for this EP? I see RF as a band that is as visual as audio-focused? What are your plans post-releasing this magnificent release? Is there a full album in the wings? Thanks for your time, any final words/messages for the music masses out there?

Mireia: We’re currently planning to release Inferno’s old aesthetic lyric video soon. Will not be as visual as “Purgatorio” is because making a music video nowadays is very expensive for an underground band like us, but we always try to give our best in each production. Wish one day we could show you everything that we have in mind without taking into account of the costs. If we could just make more videos we would do that. As you’ve said, we think it is very important to have good visuals on par with the music.

Oscar: Yes, there is a full album in the wings. We had some songs composed about the time that the idea of Seconda Morte came up, but they didn’t fit on the concept of this EP. We want to keep making songs for the next full album during next year and maybe we can hit the studio by the end of 2023.

Mireia: Thank you for having and supporting us! Hope you enjoy our brand new album as we enjoyed composing it 🖤