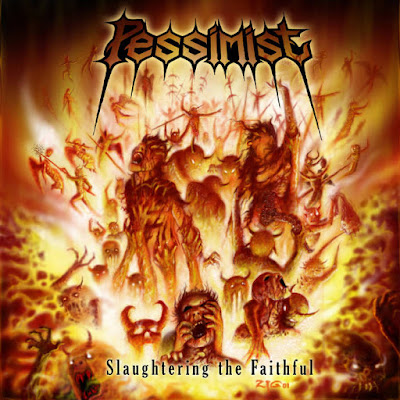 FFO: brutal, killer Old school death metal and a remaster that is perfect.

Pessimist have been destroying eardrums since 1993 and they deliver death metal as it should be. Every track overwhelms you, the drums/guitars are ridiculously hyper-fast and the vocals are deep growls that make you wanna run and hide in a bunker. The thing with this band is they completely sound like the first wave of death wave aka Death, Immolation, Macabre, and Cannibal Corpse to name but a few. I honestly think most modern death metal bands aim for too much technical wizardry and tangential forays, without thinking that all we really want is intense brutality most of the time. This album originally hails from 2001 and has been remastered a few times with this being the third time and it sounds like the truest version. This album slots in nicely to any death metal purists collection and also this band's amazing catalog of releases. But this "Ree" remaster of 2020 takes the cake and loads it with land mines. Everything is louder and definitely, the drums and vocals seem more upfront and there is a crispness to the album that wasn't there prior. This album ain't groundbreaking or massively different to the peak genre level classic albums, but personally, that's what I want from grindcore or death metal. Like a decent whiskey shot, I want what's on the label-i.e. everything is as expected-harsh, abrasive, and achieves the required result. It's just a dirty, filthy and nasty OSDM gem that has been made to assault your senses even more than the original.

Highlights: Infernal Abyss, Resurrected Torment, and the best track of this album: Empodiment of Impurity-one evil motherfucker of a track...insane in every aspect.