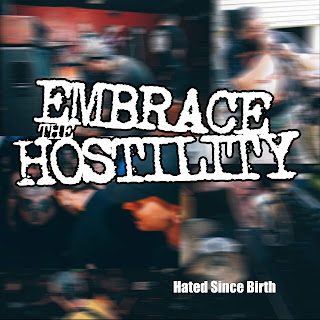 Embrace the Hostility-Hated since Birth reviewed by Mark. J. Honest, thrashy and metallic hardcore from Pennsylvania and it's gutsy and a solid debut for this band.

Bio:
Embrace the Hostility is a five-piece metal/hardcore band from Western, PA. Formed in 2009, ETH have forged a reputable name for themselves over the years as a juggernaut in their local hardcore scene. ETH recently signed with Upstate Records to take their music to the next level and appeal to a worldwide audience.

Eight solid tracks that are epic, yet understated.This band doesn't piss about, but the underlying groove and aggressive guitar tone really lifts them above their competitors. The vocals are unique and make the album flow so well.The production was dense and crisp but still so gritty. Catchy hooks and the perfect blend of metal and 90's hardcore is a solid 5 out of 5 headbangs for this reviewer.

No filler on this, but best tracks were Vicious Cycle, Permanent Ending and Victims of Time. but the release is solid from start to end.